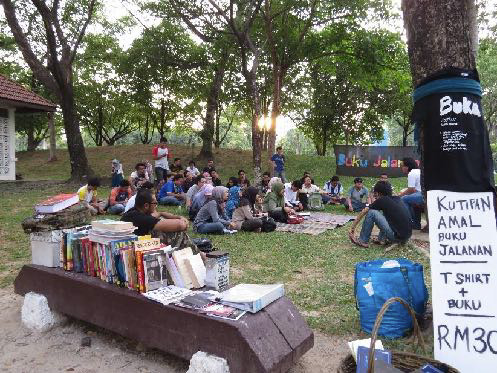 Buku Jalanan is a community driven library and educational initiative which upholds the principle of B.A.C.A (literally means ‘Read’ in Malay). B.A.C.A is the acronym for Books, Arts, Culture and Activism. From these four main principles of idea, Buku Jalanan with its approach to cultivate intellectual discussion within the public sphere consistently converge twice a month since 2011.

With a humble beginning in Shah Alam, Malaysia, now it has spread out to almost 80 different chapters with almost hundreds of budding cultural workers worldwide.

Along the years, various projects and initiatives, most notably Sindikat Campursari Program (2017), Idearaya Festival (2015), Kuala Lumpur 7th Triennial Arts Exhibition (2013) and Padang Jawa Street Arts Festival (2013) just to name a few, have been undertaken collaboratively with other collective groups in order to expand its multi-dimensional and multidisciplinary structure in engaging with different modes of education and knowledge production within the public cultural sphere.