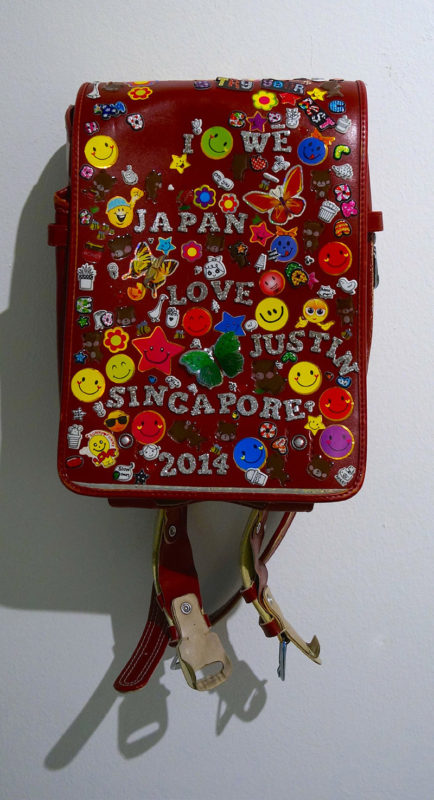 Justin Lee (b. 1963, Singapore) is a visual artist based in Singapore. Justin was awarded the National Art Council Georgette Chen Arts Scholarship for his Diploma in Fine Arts from LASALLE College of the Arts, which he completed in 1999, the N.A.F.A. Scholarship for his BA degree course at Nanyang Academy of Fine Arts in 2005, and the Mont Blanc Young Artist World Patronage Project in 2006. In 2000, he was selected to complete a six-month intensive training programme at the Tyler Print Workshop in New York, under Ken Tyler’s supervision. Justin then returned to Singapore and worked as an apprentice with the Singapore Tyler Print Institute for two years. Justin has participated in several exhibitions in Singapore and abroad. In 2003, he held two solo shows, Double Happiness, a Fantasy in Red and Toy Nation. His artworks have been exhibited, amongst others, at the Esplanade Tunnel and the Community Wall in 2005, Singapore Art Festival in Japan in 2005, the Gwang Ju National Museum and Okgwa Museum in South Korea, the 6th Culture and Art Festival of Songzhuang in Beijing, the Bangkok Art & Culture Centre, Causeway EXchange-2011 in Kuala Lumpur, Malaysia, the Art Garden at Singapore Art Museum in 2011 and 2012, National Museum of Singapore, Asian Civilizations Museum in 2011, and Japan Itoshima Arts Farm in 2012. Through a blend of East and West, Justin’s artworks evoke a different understanding of the society and lifestyle of today’s Singapore. From a cultural perspective, Justin questions his surroundings and its appearances seeking to transform everyday lifestyle into visual art. He believes that art plays an important part in helping people to grow and to gain awareness of themselves. His works also reflect on words and images from mass media messages such as signage, billboards, and consumer products, which all are aimed to control our thoughts and expressions.