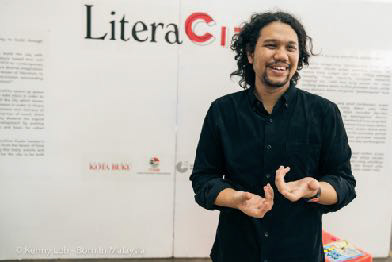 Zikri Rahman consistently embark in diverse interdisciplinary socio-political and various cultural activism projects. Buku Jalanan; a project co-founded as a cultural workers collective and community based cultural literacy initiative focusing on decentralising the modes of knowledge production. The idea has now spread out to more than 90 different locations and been adopted by hundreds of autonomous cultural workers worldwide.

Other than that, he is also the festival director for the inaugural Idearaya Festival; a festival of ideas to celebrate progressive and dynamic discourses within vibrant and diverse grassroots community, intelligentsia, civil society and community organizer in Southeast Asia.

Apart from that, Zikri is also a writer, independent researcher, translator and podcaster for various online portals such as Projek Dialog, Jalan Telawi and Roket Kini. Currently, he is doing a cultural and literary mapping project of Kuala Lumpur through the lenses of literature with LiteraCity.