Co- curated by Twardzik Ching Chor Leng, this exhibit represented Singapore’s generous, compassionate, culturally diverse and broad-minded capacity commemorating its fiftieth anniversary. The exhibition also included projects produced by students from Yishun Town Secondary School, led by teacher Candy Tong. In addition to the exhibition, there was a forum on activism and community with Jay Koh, Faris Basharahil and Loo Hwee Hwee at the Central Public Library and an artist talk by selected participating artists at LASALLE College of the Arts. These multi-faceted events enriched meaningful engagements with various communities in Singapore and extended to neighbouring nations. The FTP arrived in Singapore in August, 2015. As Singapore is largely protected from natural disasters such as earthquakes, tsunami, typhoon, and devastating floods, the intention of bringing the project to this island nation was to cultivate awareness and connect people through compassion and art. Programmes such as artists’ talk, forum on activism and community, art exhibition and art performance were planned to get the community involved in the project. In the exhibition, there were 42 participating artists from Singapore, Japan, Indonesia, United Kingdom, Australia, India and Germany.

The FTP is an example of contemporary art that is socially engaged. Kemperl’s (2013) describes contemporary art as a social practice about current issues that calls for active citizenship and critical refle[xivity].  The FTP invites active engagement through events such as forums that focused on community activism, these platforms encourage participants to develop and offer solutions to issues instead of remaining a passive and inactive audience. Cox (2000) suggested that contemporary art accepts diverse voices and viewpoints from artists as well as viewers, it provokes community to engage with ideas and relevant issues, therefore encouraging dialogue. It can also be controversial however, according to Emery (2002) shocking contemporary events and issues necessitates/instigates shocking tactics of engagement. To many, the Great East Japan Earthquake and Tsunami was a shocking event not only for the thousands who lost their lives, their loved ones and their homes, but also for people all over the world who witnessed it on their screens. For the many who were not able to be there in person to provide aid, there was a sense of helplessness. In the aftermath of this tradgedy, the FTP provided an opportunity for the artist/students to connect with the victims. As one of the student participants aptly put it, “[the backpacks are] made by someone who thinks about them and cares about them”. In this instance, Vygotsky’s (1975) view that art presents the original and the most powerful weapon in the battle for survival, and that it is the most critical intersection of all biological and social processes of a person in society, rings true. 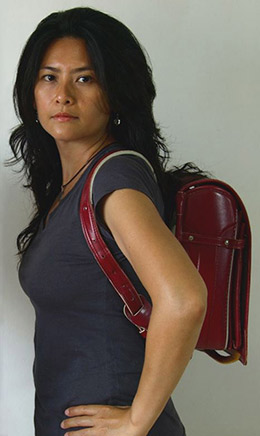 Twardzik Ching Chor Leng (b. Singapore) is currently a senior lecturer at the National Institute of Education, Nanyang Technological University, Singapore. She holds a Master of Fine Arts Degree from the University of Regina, Canada, a Bachelor of Fine Arts in Ceramics and a Diploma in Ceramic Arts from Alberta College of Art and Design, Canada. She has lectured in Lasalle College of the Arts and Nanyang Academy of Fine Arts. She was the Head of Fine Arts at the NUS High School of Math & Science from 2004-2009. As an artist-educator, Chor Leng believes in developing local talent and resources in the arts. She has previously served as judge and curator in the Singapore Youth Festival 2011 & 2014, Faculty of Fine Arts Industry Advisory Board Committee Member for Lasalle College of the Arts, Ministry of Education Art Syllabus Development Committee, as well as the Singapore Art Museum, President’s Young Talent Curatorial Committee. Chor Leng has been practising Installation art and Land art for more than 15 years. She has exhibited extensively in group and solo exhibitions internationally and locally. Founder of the arts group Landing Space that promotes Land Art in Singapore, she is also an independent curator as well as a member of WITA (Women in the Arts), Singapore. She has received meritorious awards and scholarships including the Hanna Kristmanson Ceramic Scholarship, the Ceramics Canada Award, and the Crown Life Entrance Award, she was also nominated for the President’s Young Talent Award 2009. Public commissions of Chor Leng’s works include the Esplanade in 2003, the Singapore Art Show 2005 at City Link Mall and at the Singapore Management University. The National Museum of Singapore has repeatedly commissioned her to create public interactive art works in 2006, 2007 & 2008. She has exhibited her work at the National Institute of Education Art Gallery in 2009 & 2012 and the Singapore Art Museum in 2009, 2011 & 2014. She was commissioned to create interactive sculptures for the opening of the National Gallery Singapore in 2015, Google Asia Pacific office, Singapore in 2017 and a large scale wall sculpture for the Land Transport Authority for a MRT station on the Thomson Line due to open in 2019. Corporate collectors of her work include Crown Life Canada and the University of Regina. Her works have been shown internationally in the Jakarta Biennale #14 in Jakarta, Indonesia in 2011, Galerie im Marstall Ahrengsburg, Germany in 2014, and the Shinjuku Creators Festa 2014 in Tokyo, Japan.